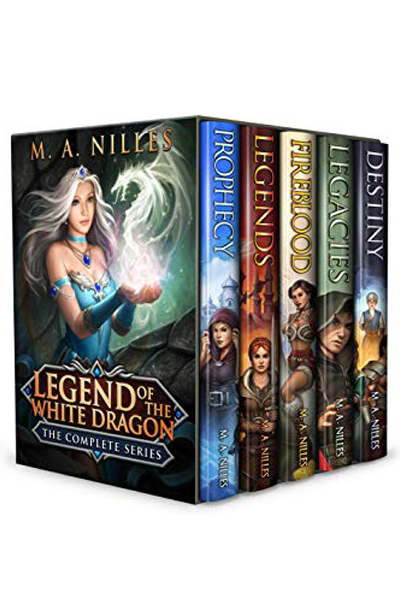 Legend of the White Dragon: The Complete Series

PROPHECY
Before his death, the white dragon made a prophecy–that he would return to unite all beings of magic in a time when he was most needed.

That time has come.

Lives will be changed and the future set for a showdown thousands of years overdue. Istaria Isolder, chosen to bear the white dragon's power, is haunted by the dragon spirit that protects it and sought by those who desire it for their own selfish purposes. Calli, in her determination to save Istaria, will set out on a journey that will lead to more than she expects. Jayson, one of the elite guards of a hidden vault of the sleeping Red Clan, will have a choice to make between duty and love. Lusiradrol, the black dragon cursed to human form by the white dragon, will do everything in her power to destroy those involved with her nemesis while seeking her Red Clan.

LEGENDS
The sorceress Lusiradrol, exiled to human form thousands of years earlier from her life as the terrible black dragon, has awakened her Red Clan. The true dragons are ready to renew their ancient war to save the world, but they cannot do it alone. Unfortunately, the magi and the two races of men are far from ready to face the darkness unleashed by Lusiradrol.

The white dragon was made to banish her, one who could unite all beings of Light, but his return is not as any foresaw. Through a woman who guards his power and his spirit, he will be reborn. But will he be too late to save the world?
__________________

FIREBLOOD
A legend exists among the tribes of the Caveshi Plains, a legend of horses blessed by the Creators for their service in a war against a terrible Darkness. Thousands of years later, the servants of Darkness have returned and prepare to reawaken their master. The horses remain in hiding, except for one.

Alo is a special stallion and his rider, Ayali, knows it; but when Alo insists on rescuing a strange man fallen in a dragon attack, no one understands the horse's purpose. Ayali's only clue is the magic she feels within the man. Over time, her abilities have weakened. Without magic, she cannot fulfill the expectations of her family and her tribe in becoming the next priestess. Ayali desires to gain that knowledge from the stranger, but with his memories gone, he can tell her nothing.

To fulfill her destiny, Ayali must face a growing darkness within her before it consumes their world and destroys her life. Alo may hold the key to her redemption but will he reveal his secrets before it's too late?
__________________

LEGACIES
The servants of Darkness amass after thousands of years of waiting, ready to purge the world of life at the command of their master.

DESTINY
Chaos is unleashed on Gairdra and the Darklord calls his servants forth to finish the task he started thousands of years before—to extinguish all life.

Once before the Darklord was nearly destroyed but survived. This time the forces of Light intend to finish the task.

The time has come for them to unite, but some still hold out. Old scores must be settled before the world can know peace, whether it is the peace of extinction or the end of a war that started with the creation of the world.

One way or another, destiny must be fulfilled.